Epidiolex is a ‘pure CBD’ plant extract, developed by British company GW Pharmaceuticals. The drug comes in the form of a viscous liquid to be dispensed in syringe droppers.

It contains 98% CBD, and no psychoactive THC (THCA). The remainder is made up of trace amounts of other cannabinoids. Epidiolex is specifically designed to target treatment resistant epilepsies, in particular Dravet Syndrome and Lennox-Gastaut.

Studies funded by GW Pharma have already been undertaken in the U.S. using non-approved, ‘artisanal’ CBD preparations to control seizures.

Systematic investigations exploring the efficacy and safety of Epidiolex have yielded similarly encouraging results for previously untreatable epileptic conditions. A recent 12 week clinical study of Epidiolex resulted in a third of participants being seizure free after undergoing this treatment.

Side effects from CBD are illustrated in this graph: 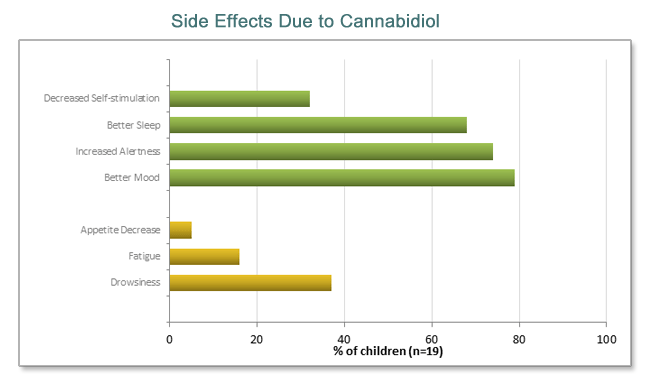 The biological mechanism by which CBD reduces seizures is not known, although there are many theories.

Its suspected that cannabidiol achieves this by modulating electrical excitability in the brain. This excessive activity between neurons can cause seizures in the form of muscle spasms, loss of consciousness, strange behavior and other symptoms.

Although findings are encouraging, well-powered double-blind randomised, controlled studies on the efficacy of pure CBD for any disorder are lacking.