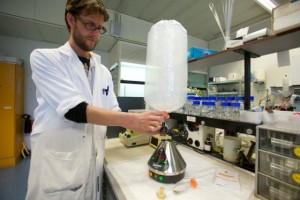 In the most basic terms, a Vapourizer is a device used to vapourize active ingredients of plant material.

Vaporizers come in different forms including table top units and portable units and can be powered by mains, battery, or butane. They consist of an extraction chamber where heat is applied to the product and air forces the vapor through.

Phytocannabinoid compounds are heated to their boiling points and a smokeless, near invisible vapour is produced.

Decarboxylation of the phytocannabinoids occurs spontaneously when heated in this manner. This remove the molecules H2O and CO2 from the compounds, allowing them to pass the blood brain barrier and thus be effective.

This vapour contains active cannabinoid compounds which can be inhaled via a balloon or directly from the unit.

Each cannabinoid has different boiling points at which they become active. An adjustable temperature allows users to target cannabinoids specific to their requirements. For example THC (for appetite stimulation) becomes active at a lower temperature that CBD (for epilepsy).

Vapourizers allow people medical access to cannabis who would otherwise be understandably reluctant due to the harmful effects of smoking.

The effects of vapourizing occur much quicker than any other method of ingestion. Patients will start to feel the effects within minutes of administration.

The only potential drawback is that vapourisers can be expensive so may not be accessible to everyone, especially as a long term solution for diseases and ailments that are globally prevalent.