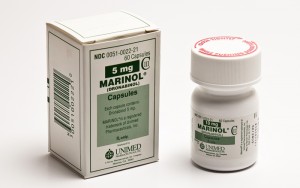 What is Marinol (Dronabinol)?

Marinol is the name under which dronabinol is marketed as a pharmaceutical drug. It comes in orally administered capsule form in doses of 2.5mg, 5mg and 10mg.

It is a synthesised version of one of the primary cannabinoids found in cannabis, THC (tetrahydrocannabinol).

This is achieved through a complex process conducted in laboratory conditions. It would be impossible to do without equipment such as a molecular sieve. Its effects mimic, to some degree, those of natural THC.

It was developed in the U.S. to meet a demand for the medicinal properties of cannabis without violating federal law. Cannabis was commonly used as a treatment or relief for glaucoma, chemotherapy induced nausea, spastic disorders, AIDS and other less severe illnesses. In 1985, Marinol was given approval by the FDA.

It’s prescribed as a treatment for nausea and vomiting caused by cancer chemotherapy and to treat loss of appetite and weight loss in patients with HIV infection.

Doses of Marinol differ depending on the physical size of the patient and the ailment being treated.

Generally, those who are suffering from nausea or vomiting are instructed to take the medicine 3 or 4 times a day, while those suffering with appetite loss will usually only take Marinol twice daily. These are not strict guidelines however and patient’s should strictly adhere to their doctor’s recommended dosage.

Dronabinol is one of a handful of legally available cannabis based medicines that can provide relief from chronic illnesses and conditions.

It is beneficial to those who struggle to administer orally due to breathing difficulties or oral obstructions.

THC levels of 98% can induce far more severe side effects than cannabis, such as: abdominal pain, dizziness, confusion, depression, nightmares, speech difficulties, chills, sweating, and even psychological and physiological dependence.

Patients usually claim to benefit more from cannabis in its natural form.

The fact it isn’t recognised as a treatment for complex illness such as cancer is testament to the theory that cannabinoids are most effective when working in synergy with each other, as is found in natural cannabis plants and extracts.

Unlike smoking or vapourizing cannabis, it can take up to 2 hours to take effect.